How to land on the Moon? A FIT student's simulation successful in the 8 of BUT competition 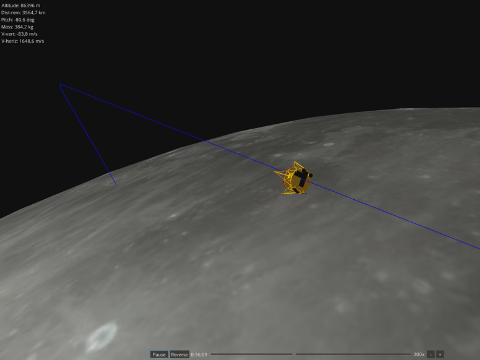 It has been more than 48 years since humans last walked on the surface of the Moon. A potential return to the Moon has recently become a frequently discussed topic and it attracted the attention of Jakub Karpíšek, a FIT student, who decided to research this area as part of his Bachelor's thesis. The jurors of the 8 of BUT were fascinated by his lunar landing simulation and awarded him a second place in the competition.

Two years ago, the Beresheet probe and its landing in Mare Serenitatis was supposed to become the first successful commercial mission to the Moon. Everything was going smoothly in the beginning, but due to a malfunction of the lander's gyroscopes, the spacecraft could not sufficiently decelerate and it crashed into the lunar surface.

Jakub Karpíšek, a FIT student, saw what happened to the lunar lander constructed by the Israeli company SpaceIL. When he later noticed "Lunar Landing Simulation" among the proposed diploma topics, it immediately caught his attention and he decided to try to "re-calculate" the Beresheet mission.

"In my thesis, I focus on computing an optimal descent trajectory, which could be used, for example, for comparison with different calculations. A part of my work consisted in the design and implementation of a 3D visualisation environment. You could use it to visualise the descent on the optimal trajectory or upload your own trajectory and play an animation of the landing on the Moon with that trajectory," explains Jakub. The research and references accompanying his thesis, supervised by doc. Peter Chudý, can support the work of other researchers.

In his thesis, Jakub Karpíšek managed to find the optimal descent trajectory minimising propellant consumption and his presentation was successful in "8 of BUT", a traditional contest of the best Bachelor's theses from all BUT faculties in the given academic year. This year, the presentations took place online due to the ongoing pandemic.

"My overall experience is very positive. The presentations of other contestants were really enriching and I am grateful that I had the opportunity to present my work and try what it is like to explain a more complex technical topic to the public. I learnt how important it is to be flexible. I was prepared to present my work standing in front of an audience but, eventually, I had to remain seated behind a desk and could not interact too well with my presentation. That threw me off a bit," recalls Jakub, smiling.

The jury consisting of BUT's representatives awarded Jakub the second place. They evaluated, in particular, the participants' ability to present their topics in a clear and engaging manner. To achieve that, students participated in a virtual course of presentation skills which took place during November and December.

However, as Jakub Karpíšek says, the most difficult thing about the Bachelor's thesis was to stay motivated and keep working, even during a national lockdown and the "remote learning" with little possibility to do some sports or meet with friends. "As to the research, the most difficult part was to understand how the lunar descent trajectory is actually calculated and to describe the used mathematical tools and derivation of the motion equations," he adds.

Jakub has been fascinated by space since his early childhood. Now he is a student of the first year of follow-up Master's studies and considers researching space missions further, for example for his Master's thesis. "In that case, we would probably travel to even more distant places than the Moon," he suggests. He is not sure about turning space exploration into a professional career.

"That would be definitely interesting, but so far I feel like staying at home in Krkonoše. But I think that with the options to work from home that we have today, opportunities like this are still available. Even so, I would prefer to focus on software development only and leave the trajectory computations to someone more mathematically adept," he laughs.

Software development is an area that he is becoming increasingly interested in. "I would like to work on something that helps a lot of people every day - maps, route or task planners, banking apps, calendars - simply applications that people are fond of because they help them organise their time and make their work easier," he explains.

And what future do space missions have, in Jakub's opinion? "The reusability of launch vehicles will be crucial. Vast majority of the current launch systems can only be used once. I think others will soon follow the example of SpaceX which partially reuses its launch vehicles. The cost of reuse is significantly cheaper than building a new rocket. This opens a range of completely new possibilities, we just need to choose where to fly," he says.

8 of BUT is a traditional presentation competition of the best Bachelor's theses wrote by students from all BUT faculties in the previous academic year. The theses and their authors are nominated by the management of individual faculties. The selected students then enrol in a presentation skills course and, during the competition, present their final theses to a jury, which evaluates their performance, especially the ability to present their topic clearly and in an engaging manner.

The winner of the 8th year of the competition was Michael Rosický from the Faculty of Mechanical Engineering, who impressed the jury with his presentation of a thesis titled Analysis of Mechanical Properties of 3D-Printed Orthopaedic Insoles. Jakub Karpíšek from FIT ranked second and the third place was awarded to Gabriela Trávníčková, a student of the Faculty of Chemistry, for her study on mercury contamination in forested areas in the Czech Republic.