If you want to found a faculty, you need a notebook. Preferably a lined one He has been coming to the building at Božetěchova since 1969. When Tomáš Hruška spent days and nights here working with a mainframe computer as a student at the Faculty of Electrical Engineering in the 1970s, it probably would not have occurred to him that he would one day be the first Dean of the Faculty of Information Technology to be established here. He still remembers founding of FIT as one of the most enjoyable periods of his long career.

When and why did the original idea to found the faculty materialised?

The first impulse came back in 1991, but unfortunately an individual faculty wasn't established at that time. Our only achievement was that the Faculty of Electrical Engineering was renamed to the Faculty of Electrical Engineering and Computer Science, which was a good marketing move at the time. Information technology began to be used more and more frequently in the world, there was great interest in it and it was clear that it wouldn't remain just a theoretical science about computers and programs, but that this field has a great future. However, the Masaryk University beat us to it in 1994, so unfortunately, we didn't become the first faculty of informatics in the Czech Republic, but this only motivated us to devote rest of the decade to making preparations so that we could act when the right time came.

So when was the right moment?

It was a long-term effort. First, there was a need to have some qualified people who would be able to hold relevant positions in case the faculty would be established. We succeeded because we had managed to gain four professorships at the Department of Computer Science and Engineering in the 1990s; this department then laid down the foundations on which the faculty was established. The second part was getting outside support. In this regard, we were aided by the fact that two faculties separated from BUT, which were then involved in the foundation of the Tomáš Baťa University in Zlín, and so our university needed more students. At that situation, establishing a new faculty appeared to be a good solution of the issue at hand and, after many discussions and negotiations, it became a part of the university's long-term plan. We had a lot of work ahead of us preparing the documentation for the accreditation commission, which eventually approved the establishment of a faculty, and so a new Faculty of Information Technology was founded on 1 January 2002.

What was the biggest organisational challenge?

Nothing in particular. Apart from a complex administration, you also need people, money and spaces. As soon as we had this, everything went well. A couple of colleagues warned me about what can go wrong, but if you make enough preparations, there is nothing to worry about. For this, I recommend you get a notepad, a lined one if possible, or an Excel file in which you can write down everything you need. We knew in advance how many people we wanted in which department, how much money we needed to do that and where we could get it, as well as how many students we wanted and could actually have. Everything was prepared in a great detail. At that time, it was generally possible to make a lot of decisions quickly, and since it was a good time to found a new faculty both for us and for the entire BUT, it went relatively smoothly.

Did the separation damage relationship at BUT?

Not at all. I know that this isn't always the case, so I have to thank professor Vrba, the then Dean of the Faculty of Electrical Engineering and Computer Science, and others, such as the then Rector of BUT, Jan Vrbka. Contrary to what we could see at other universities, where faculties focusing on informatics also gradually began to form and become independent, there were no fights over students, property or name between faculties or individuals at BUT. In the beginning, we were given 120 students, all doctoral students from the Department of Computer Science and Engineering and premises at Božetěchova street. I think the separation benefited both faculties, i.e., both FIT and present-day FEEC, because they are still successfully developing on their own. Furthermore, our relations remain very good, this is evidenced, for example, by the ball, which we are still happy to organise together.

Did you start from scratch at Božetěchova?

Not in terms of reputation. The faculty was established from the Department of Computer Science and Engineering, which already had a good reputation. The situation concerning foreign relations was much worse as there weren't many foreign contacts there before 1989, and there were no people who would establish them. Fortunately, much has changed in this regard over the last 20 years. 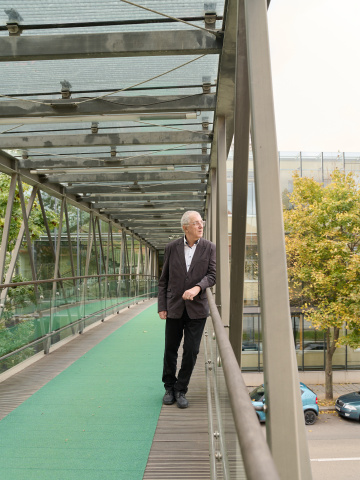 You linked virtually your entire career with FIT. What kept you here?

I like the unique environment of FIT. But most of all, I would be very hard pressed to find such a good team elsewhere. A faculty isn't a corporation, it is mostly about long-term work with people. Therefore, it is necessary to find such colleagues who will do what they enjoy and, at the same time, contribute to the whole. At the very beginning of FIT, it was Zdena Rábová who deserves most of the credit for making it happen, she was the glue that bound the faculty together, and I'm glad that we are still able to maintain it this way. Especially when it comes to managerial positions you need people for whom the word "I" is way below "we" on the list of priorities. In my opinion, no successful IT expert can do without qualities such as humility and fairness.

When you look at the current state of the faculty, did the visions you had when founding it come true?

When I was handing the reigns over to the new Dean ten years after taking over the Department of Computer Science and Engineering, but I wasn't handing over a mere department but a financially strong and relatively reputable faculty located in a new campus, I had a feeling of a job well done. Many things have changed since then, even the field itself has changed completely. Today, FIT has much more students and employees and the manner of funding has changed entirely. The faculty switched to mass teaching and a department for grants (about which no one had any idea at the beginning) was created. Of course there is still much room for improvements. But the faculty is stable, has a beautiful compound and modern equipment and it is sought-after. If it also manages to maintain the human factor, then I believe we succeeded.