Kilojoules and protein intake, eating chicken with rice instead of burger with fries - do you think that only bodybuilders worry about their diet? That's not the case at all! Everyone should be interested in nutrition, whether they want to lose weight, build muscles, or just maintain the same weight they had when they were twenty (if advisable). It should now be easier than ever to create the perfect diet thanks to an app developed by a computer science student from Brno University of Technology. Lovers of sweets or the aforementioned burger will also find something to enjoy.

"I had a problem gaining weight for a few years and gradually found that I had to think a lot more about my eating habits and plan my meals accordingly. I wanted to create a tool that would make it easier for people to generate a daily meal plan based on their specific nutritional needs and give them some inspiration on what to cook or have for a snack," explains Jakub Pojsl, a student and enthusiastic athlete, while showing me a test version of his app on the laptop screen.

A meal plan can also be used to give an idea of how much food a person should eat in a day. | Author: Jakub Pojsl

After entering information such as age, weight, height and the amount of physical activity during the day, the program calculates how many calories a person should take in and how to distribute them among proteins, carbohydrates and fat, based on certain formulas and goals. At this point, much of the internet calculators' work is done. Jakub's app, however, is only just beginning to show its promise.

"The app generates a tailored diet according to the nutritional values you put in. At the same time, users can generate individual meals repeatedly during the day if they are not satisfactory," he says, pointing to the breakfast box, where the system automatically generated a bread roll with salami and a piece of vegetable. If you have a bit of a sweet tooth at the moment, the system offers an alternative in the form of porridge, which still fits into the recommended daily nutritional intake scheme.

Beef steak does not make a good breakfast

"One of the problems I dealt with was the classification of meals so that the system would not recommend burger for breakfast. The app has fixed rules, the foods have clearly defined categories and it is set which ones go together. When the algorithm creates a breakfast, it selects, for example, a combination of bread, fruit, and a dairy product," says Jakub Pojsl, who is in his fourth year of study at the BUT Faculty of Information Technology. The app served first as his undergraduate thesis project and an inspiration for his family restricted by a Covid-19 lockdown and a lack of creative inspiration in coming up with meaningful meals on a daily basis. In future, it should help anyone interested in improving their eating habits and making meal planning easier. 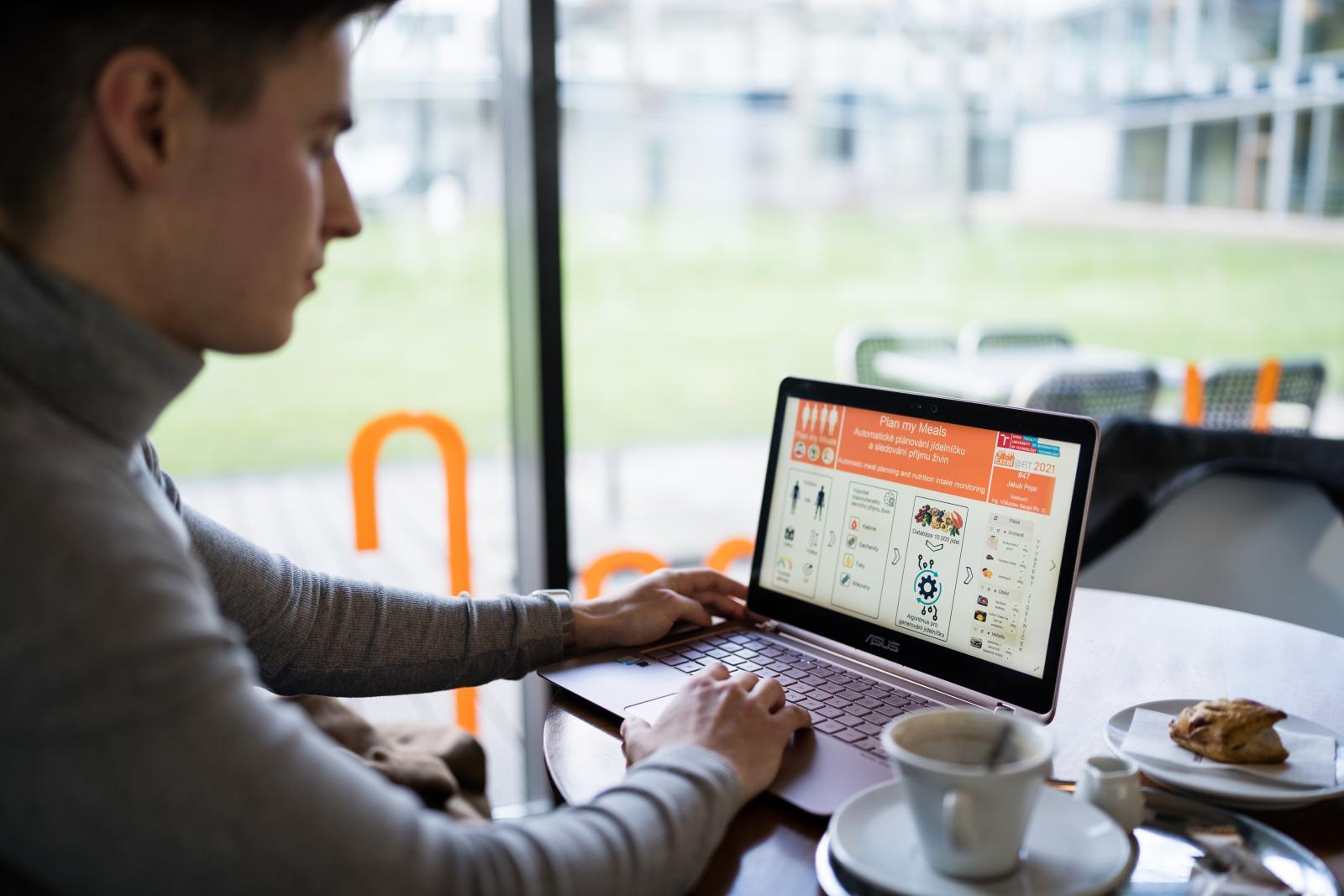 The application is still in the improvement and testing stage. | Author: Jan Prokopius

Machine learning should be another modern feature of the system. For instance, if a user repeatedly eliminated dishes containing onion from their menu, the app will remember this and avoid such dishes in the future. On the other hand, however, a user could receive recommendations for foods that people with similar tastes also like, since the system will learn from data collected from many different user accounts.

No food is forbidden

Thanks to planning your meals ahead and the possibility to manually add foods from a large database, it is possible to include foods that are often demonised in lifestyle magazine articles, saying that if you want to lose weight, you have to forget about them for the rest of your life.

Individual dishes can be changed randomly or according to current taste. | Author: Jakub Pojsl

"I eat everything, I like pizza and spaghetti bolognese, for example," says the young computer scientist. Even though his most favourite food is chicken steak with rice, he created the app with the idea of generating a menu that includes what users really want to eat. This is the only way to help them stick to the meal plan in the long term so that it eventually becomes a part of their healthy lifestyle.

Automatic shopping via the app

Although the app is still under development and being tested, Jakub Pojsl is already thinking about further additions: "An advanced version would probably be paid. I am also in talks with the Rohlík food delivery service about the possibility of automatically ordering ingredients according to the generated meal plan."

Another possibility is a smartwatch link, which would send data into the app on, for example, how much walking or exercise the user has done on a given day, which would help the app determine that the body needs to replenish energy. "At the same time, the system would not recommend dumplings as a post-workout meal, but something lighter," adds Pojsl. However, no app can make a person eat healthy, he adds.