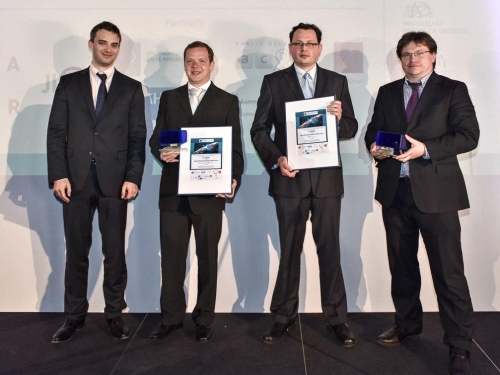 The ANT@FIT research team from BUT has created one of the world's first acceleration cards with a bandwidth of 100 Gb/s.In contrast to other devices available, the new card is much more powerful, allowing deployment in high-speed networks. Working on acceleration of time-critical operations used in network infrastructure equipment and in network monitoring and security, the research group also participated in several other commercially successful projects.

It all started thanks to our co-operation with the CESNET association. In 2003, Jan Kořenek, then still a Master's student of BUT, joined one of the research projects, which aimed at creating a high-speed IPv6 router based on a commodity computer and an acceleration card. Together with his colleagues, he accepted the challenge to create a 10Gb adapter, which even the renowned companies participating in the European Scampi project would not attempt to make. Two years later, the team managed to construct the adapter and the outcome was so good that its authors later started to market through a new, very successful spin-off company INVEA-TECH.

"It was already at that time I felt the need to establish a research group at the FIT BUT which would bring together excellent researchers and PhD students with the aim to focus on problems that arise from the trend of the constantly increasing speed of backbone networks. The thing is that increasing the speed of the network lines is closely related to the need to increase the performance of the network devices," explains Jan Kořenek, head researcher of the ANT@FIT team. Nowadays, the bandwidth of hundreds of gigabits is naturally not the concern of end users, but rather operators of data centres and high-speed telecommunication networks. These have high demands on security.

Security is therefore of key importance and this is why one of the first 100Gb acceleration cards was created. After being introduced on the market, the card attracted great attention and this may perhaps be one of the reasons why a large manufacturer of network testing equipment subsequently used it in its products. The team also received several awards, such as the first place in the award Česká hlava 2016 within the Industrie category. 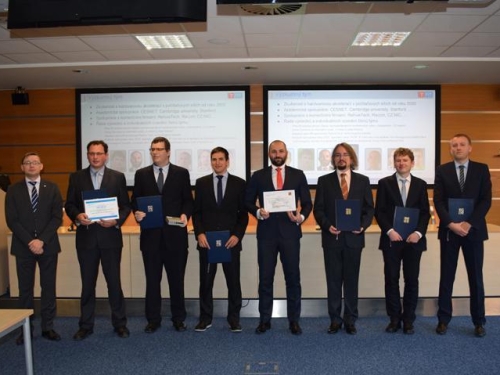 The Research Group was also awarded by the Minister of the Interior | Author: archive of Jan Kořenek

The co-operation between the BUT researchers and the Police of the Czech Republic in the area of lawful interception can serve as a good example of the use of theoretical knowledge in the area of acceleration in practice. Not only police officers, but also other State security forces can now use the BUT probe, which helps them fight cybercrime every day. In 2018, the BUT team received the Price of the Minister of the Interior for outstanding results in the area of security research.

However, their work does not end here. "We are always pursuing a new goal. Our next ambition is to create a 400Gb card. However, it would be incorrect to think that our only objective is to increase the speed. We must also improve the flexibility of the entire system," emphasised Kořenek. The team members gained experience in the area of computer networks mainly by participating in European and locally financed projects, but also by actively communicating with commercial partners and users from among the State security forces.

In recent years, the research group has also been dealing with the issue of security of the Internet of Things, i.e. technologies for modern devices that can be controlled remotely via the Internet. With the help of devices such as smart thermostats, locks or air quality monitoring and control devices, our everyday life can be much easier. While the number of devices connected to the Internet is constantly increasing, manufacturers and customers often do not consider their safety. This is yet another task for the researchers from ANT@FIT. "Naturally, manufacturers are trying to market smart devices as quickly as possible, regardless of whether those devices are resistant to possible attacks. Our aim is to be able to detect attacks and provide suitable security solutions which will not significantly increase the consumption of the devices," explained the head of the team.

Jan Kořenek, head of the ANT@FIT team, received a co-operation of the year award (second from the right) | Author: Jan Kořenek's archive

The ANT@FIT research team is headed by Associate Professor Jan Kořenek from the FIT BUT. He co-operates not only with the CESNET or CZ.NIC associations, but also provides contract research to a number of commercial companies. Jan Kořenek also co-founded spin-off companies FlowMon Networks, Netcope Technologies and RehiveTech. Members of the research team go on regular internships at the co-operating Cambridge University and Queen Mary University of London.