Painting with the motif of death from the Královo Pole monastery 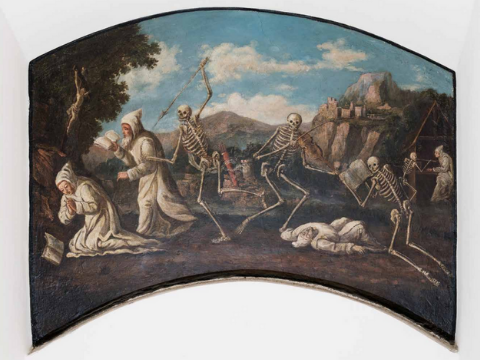 The ancient buildings of the former Carthusian monastery in Královo Pole hide many artistic treasures within their walls. The lavish monastery founded by the Moravian branch of the royal House of Luxembourg was one of the most important religious institutions in Moravia since the Middle Ages, which naturally influenced the selection of outstanding architects, painters, sculptors and artisans who worked on it. Although the monastery, dissolved by the Austrian Emperor Joseph II, has not served its original purpose for 240 years, several remarkable testaments to its history remain. One of them is the scene of the Carthusian dance of death in one of the monastery hallways.

The dance of death theme has been one of the most popular and widespread allegorical scenes depicted in European art since the late Middle Ages. And not just visual art. The dance of living and dead figures also appeared in literature, medieval theatre, poetry and music. The 'Danse Macabre', as the scene is often called, had already been established in the mediaeval folk culture. In French, English and German cultures, there were documented parades of people wearing masks of death and the dearly departed on the eve of All Saints' Day, which have survived to the present day in the form of Halloween celebrations.

All these scenes had a common antecedent in Latin, French and Italian poems of the late 13th and early 14th centuries, which shared the motif of the fragility of human life and the inevitability and impartiality of death. In poems and scenes, the skeletons beckoned to representatives of all strata of medieval society, regardless of whether they were popes, emperors, rich men, hermits, paupers, old men or children. The motif gained urgency in the late Middle Ages when Europe was plagued by the Black Death and prolonged wars between Western European realms.

Works reminding of the approaching death and calling for repentance appeared alongside depictions of the triumph of death in medieval public spaces and private residences. The most important depiction of the triumph of death was the now lost painting in the Holy Innocents' Cemetery in Paris, which, among other things, included a depiction of a dead king. Since the work was created during a period of regency, it is possible that the painting also served as an allegory to the contemporary political situation. One of the most famous danse macabre scenes can still be found at the church in then plague-ridden northern Italian town of Clusone, where skeletons and the medieval inhabitants of the town prance merrily beneath the triumphant death.

Even the most important artists have often worked on the theme of the dance of death. Between 1523 and 1526, Hans Holbein the Younger, who inspired many German Renaissance painters, created a series of drawings, which were soon afterwards converted into prints. The Baroque mural in the corridor of the Carthusian monastery in Královo Pole is also inspired by these sources. Its location is not exceptional. It was related to the general operation of the Carthusian monastery, which imposed a strict cloister on its monks.

The brethren were to be separated from all earthly matters not only during their life but also after death. Their bodies were usually interred on the monastery grounds, often also in the inner courtyard, which was usually located in the immediate vicinity of the scene. Compared to the usual depictions of the dance of death, however, the painting from Královo Pole is unique in many respects. First of all, it is not based on any known graphic sheet, and its composition thus draws on the experience and skills of the painter himself. The way the scene is presented is not usual either. The only thing that links it with the typical danse macabre scenes is the fact that one of the skeletons is playing the violin.

It is thus rather a triumph of death, associated exclusively with the Carthusian monks. The main motif of the scene set in a mountainous landscape with a castle and a tower are two skeletons in the foreground. One of them is seen just a moment before it drives a spear or arrow into the back of a monk reading from the scriptures in front of a crucifix. Immediately afterwards, a second monk comes forward, humbly praying under the cross. Above the dead body of a monk lying on the bare ground, the second of the skeletons plays the violin, while another kneels beside him with an open book. In the background is a scene set in a lonely cell with a sitting monk, into which death is also slowly creeping.

Why the work was created in this fashion is not clear. Given the method in which the mural was painted, it is likely that it was created sometime around 1700, and it is possible that it refers to a specific, now forgotten event where several Carthusian brethren may have died. Its artistic quality is not remarkable and can hardly bear comparison with, for example, the frescoes by František Antonín Maulbertsch in the monastery church or other local works of art. It was probably painted by a member of the painter Guild of Saint Luke in Brno, but it is just as likely that the painting was made by one of the monks themselves. The schematic depiction of the landscape with the castle in the background suggests that the artist may have used, at least for this part, an older graphic sheet, perhaps even medieval in origin.

As mentioned in the introduction, not much now remains of the glory of the once rich monastery. The painting of the triumph of death containing the Carthusians is thus a unique and rare insight into the lifestyle of Baroque monks, for whom the motif of death likely held the same meaning it once had in the Middle Ages. The scene takes on a special poignancy in light of the recent pandemic when society is slowly emerging from a long period of uncertainty during which the fragility of life has again become more apparent. The historical significance of the triumph of death in the Královo Pole monastery is unquestionable and it rightly belongs to the artistic treasures associated with the Brno University of Technology.